Our first event in Vicksburg was a success. We partnered with the Vicksburg Factory Outlets as part of the city’s widely celebrated back to school pep rally, where many were reached. The 3Fold concert that night was electrifying, the audience was on their feet most of the night, and we gave out great back to school packages. The sponsors and collaborators who previously knew nothing about 3Fold Productions were now already looking forward to the next event.

However, after it was all said and done, the smoke cleared away, the noise was gone, and the dust had settled, we realized that something was missing – the main demographic we wanted to reach. We’d founded 3Fold Productions to take hope and empowerment where it was missing most, however, due to this events location, we felt we were alienating our target audience by requiring people to come to us, on a prime commercial property, uptown.

The following year, we relocated our efforts to the Pearl Street community, a seemingly forgotten part of town. We chose a location that was the epitome of the soul and story of the community – the Pearl Street Park. It was once a place vibrant with life and energy. A place for the community to come connect and celebrate. Now it was overrun with dirt, vegetation, and broken down equipment.

We partnered with the city government to fix or replace park equipment, and get rid of the overgrowth. Then we literally put our hands to the plow to get the park ready for the communal plans we had for it. Once the park had been restored, we set to work bringing it to the lively community life-vein that it had once been.

We produced a series of events centered at the park. Including a block party funded by International Paper to be focused on underage drinking. We joined with with MADD, and other community organizations to produce a lively initiative with live music, interactive anti-underage drinking exhibits, and the mayor on hand to give a special encouraging message to the Pearl Street community.

Traits of a 3Fold City Grower:

1. A laser-focus on efficiently and effectively providing high quality service for the community

2. A community-first mindset which constantly chooses the greater good over the bottom line

3. A good reputation and proven track record of service among the populations they serve 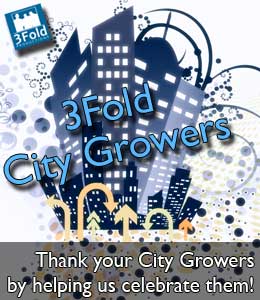 If you know an individual or an organization that has the traits of a 3Fold City Grower, then we want to know about them! Click "Learn More" to find out how to share your motivational or inspirational story about a City Grower!